December 3 – 6, my wife Roxanne and I were blessed to attend the 2019 Christian Camp and Conference Association (CCCA) National Conference in Orlando with hundreds of other camp leaders. 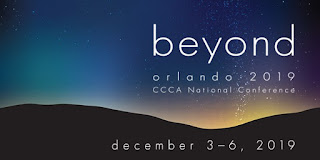 CCCA had promoted the event as “BEYOND. We gather. We worship. We connect. We pray. We learn and get equipped for the year ahead. Beyond our successes. Beyond our suffering. Beyond all that we can ask or imagine.”

Beyond is an adverb meaning “in addition” or “farther along.” It requires a point of reference so in our spiritual walk, our faith is that reference. We are encouraged to go farther along, press on, and grow in our relationship with Him and with each other. And what exactly lies beyond is up to Him. It’s one thing to sit at the campfire and gaze at Jupiter, Saturn, and the moon as we did so many nights at camp this past summer. It’s another thing to consider the entire universe – the beyond.

Then in Orlando, author/speaker Margaret Feinberg opened the conference with an admission that the Spirit redirected her from the scripture suggested by Gregg Hunter, president/CEO of CCCA. That scripture tied in with the conference’s theme: Beyond. Instead, Margaret opened the conference sessions with John 21 and casting our nets to the right side. Then, to close the last session, author/speaker Eugene Cho chose the very same scripture from John 21 and what it truly means to cast our nets to the right side.

Though Margaret and Eugene unpacked John 21:6 in different ways, both conveyed the knowledge that these men knew the Sea of Galilee very well. They were experienced at reading the lake and conditions, but this fishing trip was about the dark unknown following Jesus’ suffering. Especially for Peter who had so boldly proclaimed his defense for Jesus before the rooster called him out. This was about trust and change – about transformation within to lead transformation beyond.

The world of Christian camping is experiencing some tough times. Doctrinal camp attendance has experienced a slight but consistent decline over the past many years as summer activities and commitments compete with the traditional Christian camp. A decade ago, the board of Camp Lake Louise was challenged by the American Baptist Church of Michigan to seek a vision farther along, to go ‘beyond’ the traditional.

The result was Higher Ground at Lake Louise, and a diverse mix of campers seeking one common net: the Father heart of God. Though the camp’s mission of leading campers to know God, love God, and serve God through faith in Jesus Christ remains the same, the camp is following the example of John 21:6, and trusting in change. 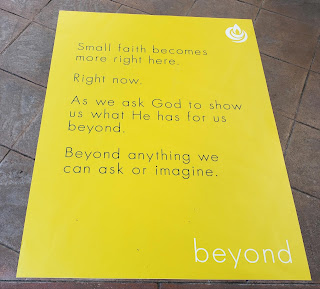 At the conference, Higher Ground at Lake Louise board member and Psalm68five Ministries founder, Bryan Johnson, was invited to share Psalm68five with all attendees during a morning session. Photos of mentors and mentees from various camps including Higher Ground at Lake Louise were shown on the large video screen as Bryan spoke about the ‘love note’ God had revealed to him years ago as a fatherless child through Psalm 68:5. That scripture as well as more than 40 others in the Old Testament alone provide God’s promise to those longing for the Father heart of God… those longing for a camp that is willing to share a ‘love note’ from their heavenly Father… a camp willing to go beyond.

God is amazing. I thought I had the conference all figured out; scheduling workshops on leadership, mentoring, volunteerism, diversity, culture and fund raising – all very important subjects. Yet only the God of beyond can take a detailed transition and detailed conference, and tie them together in one simple verse:  “And He said to them, ‘Cast the net on the right side of the boat, and you will find some.’ So they cast, and now they were not able to draw it in because of the multitude of fish.”

Just as the disciples were joined by Jesus that early morning on the shore of Galilee, we are expectant of His peace, hope, and love this advent season. May you have a very safe and joyful Christmas!